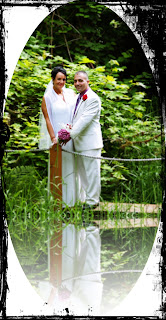 From March until October, Radiant Touch weddings fills the day with beautiful and romantic elopement packages for couples in love.
This last weekend was no exception. Tami and Sulieman have maintained a long distance relationship and engagement from the United States to the Middle East, Jordan to be exact. Through the technology of Skype and mobile phones they have kept their love alive.
Last year they were able to have a ceremony of Love in the Middle East. Continuing their long distance relationship through distance and time, they were finally able to set a date for their legal U.S. marriage ceremony.
Tami and Sulieman chose Beverly Mason of The Radiant Touch for their marriage ceremony and celebration. Tami found Beverly online and inquired about an elopement ceremony. After hearing about their relationship and history, Beverly offered an exclusive elopement package that offered everything they could ever want in their special day. The date of June 11, 2011 was set. Sulieman had acquired all necessary documents and VISA to finally be with his beloved Tami.
On Saturday, June 11, 2011 Sulieman and Tami, along with Tami's daughter, mother and best friend, arrived at the country wooded setting of Radiant Touch Weddings, outside of Oregon City.
The assistant photographer, Amanda, was shooting photos as the couple met with Beverly and she filled out the certificate and other paper work. Once everyone had arrived, they proceded down to the dock on a rainbow trout pond. The beautiful 16-20 inch trout jumped out of the water to gobble up the feed thrown to them.
The ceremony proceeded as the sun broke through the clouds for a beautiful afternoon. Beverly performed a non religious ceremony which spoke of the love and commitment shared between Suleiman and Tami. After exchanging vows and rings, Tami's daughter, Madisyn, joined the couple in a Unity Sand ceremony.
After they were pronounced husband and wife, each signed the marriage certificate and had many photos taken throughout the beautiful locations on the property. Photos of the couple and their friends taken on the dock, the bridges and the sprawling green lawn captures the happiness and joy of the day.
It was a beautiful wedding ceremony and a enjoyable time had by all.
To schedule your own Elopement Package, contact Beverly Mason on www.TheRadiantTouch.com It will be romantic, memorable and affordable to be enjoyed by all!
Enjoy a slideshow video of the event at http://animoto.com/play/1XOA0kDRIFk6Ir9xZwx21A
Posted by Unknown at 4:00 PM No comments: